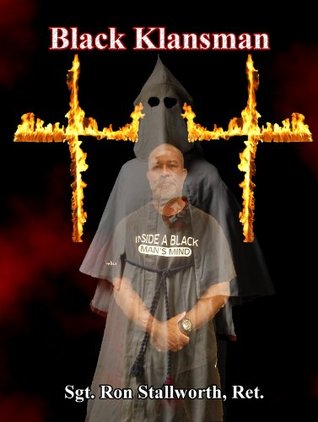 Content Warning: This book is about the KKK. I will refrain from quoting the actual words of this organization, but there will clearly be sensitive topics: racism, homophobia, anti-semitism, and pretty much any anti- or -phobia you can think of. If that makes you uncomfortable, click away.

The new Spike Lee movie, BlacKkKlansman, is based on Ron Stallworth’s memoir of (almost) the same name. He describes his experience in the late 1970’s in which he, as a detective in the Colorado Springs Police Department, went undercover in the developing chapter of the Ku Klux Klan in Colorado Springs. One thing that made it even more interesting: Stallworth is African-American.

So yeah, what would possess Ron Stallworth to join the KKK? In fact, Stallworth says that the Colorado Springs KKK chapter was just starting up. They put advertisements in the newspaper for new members. Stallworth put in one impulsive application that led to an immensely intricate undercover operation.

Chuck, another officer in Colorado Springs, acted as “Ron” and attended the KKK meetings in person. The real Ron Stallworth handled all communication via telephone. Stallworth wanted to infiltrate the KKK in his community and hopefully stop their acts of domestic terrorism from infecting his community.

He managed to do that. Because there always seemed to be patrol cars by the locations of planned cross burnings, they were usually called off. Several groups in Colorado Springs had cropped up to protest the new and growing chapter. In fact, Stalworth managed to expose members of the KKK in high ranking positions, such as NORAD.

Did his investigation directly lead to any arrests? No. Did it go as long as he would have wanted? No. But did Stallworth at least impede their efforts in his community? Yes.

Now, what did I think of Stallworth’s memoir? I thought it was an incredibly entertaining read. I got a chance to have a laugh at some bigots’ expense, and I certainly don’t regret reading about Sgt. Stallworth’s experiences. However, the book isn’t too long or detailed really. I keep thinking that Stallworth’s hands are somewhat tied when it comes to some of the ugly details of his time in the KKK. Or maybe since it was a new and rather incompetently ran chapter, there is little action. It’s an interesting concept, but I feel like Stallworth left out some of the details of his year-long investigation. Did he think that readers wouldn’t be interested?

I read Black Klansman in about half a day. For half a day’s worth of content, I thought it was good. It was an interesting account of a unique police investigation. If that sounds interesting, then pick up the book and give it a read.