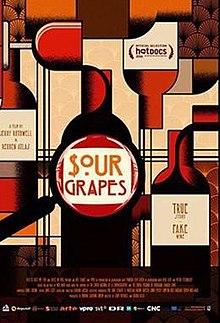 To start off, this week I saw the 2016 documentary, Sour Grapes. It’s about a world of wine that many never get to see. I’ve never spent more than like $15 on a bottle of wine. My tastes are more in the $7-10 range if I’m being honest. but Sour Grapes is about people that buy wine that costs tens or even hundreds of thousands of dollars for a bottle. And when there’s that much money involved, there’s room for people to try and cheat the system.

Wine fraud is a really strange but interesting kind of fraud. Of all the things to counterfeit, why wine? Well, remember how much some people are willing to pay for fine wine. Wine is something that’s oddly both universal and elitist. From two-buck chuck to $100,000 or more bottles sold at auction, wine is one of those things where there is really something for everybody. But anyway, here we follow Rudy Kurniawan and the biggest scandal in the luxury wine industry.

Kurniawan essentially counterfeited extremely expensive wines and sold them at auction. I wish the documentary had gone more in-depth with his methods, but it does show the tools that he would have used. There are interviews with his lawyer and his friends that he would drink expensive wine with. Some of them still don’t believe that he did it.

Sour Grapes also follows Laurent Ponsont, a winemaker in Burgundy, France. He kicked off the bulk of the investigation after finding that wines that his family had made were among the counterfeits. He withdrew all of the wines from his winery in one auction that he had traveled to New York for, and he put the pieces into place for Kurniawan’s unmasking. Ponsont comes across as a man with a deep passion for what he does, and I couldn’t help but feel offended and outraged for him when he found out that his hard work was being imitated and profited off of.

I would recommend this documentary to anyone that likes wine. even though I’m no sommelier, I think all of the hype and expertise around wine is interesting. I never thought about wine fraud before, but you bet I am now. I’m probably going to watch it again soon with some family that enjoys a good glass of wine. However, we’re not going to splurge quite so much.